News media report that the US Dept. of Agriculture just announced up to $12 billion in emergency relief for farmers caught in the escalating trade war. The figure is several magnitudes larger than that allocated for workers suffering from globalization under Trade Adjustment Assistance.  See below last year’s allocation for the program, which was shy of $1 billion: 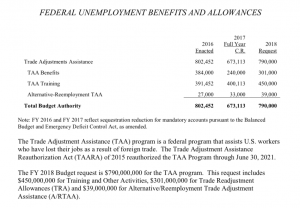